My new blog post deals with all high-end audio fairs in 2015, at which I participated personally - a resume. What was good, what exhibition stands particularly for what? It should be an interesting, positive, and of course a subjective guide to upcoming fairs in the year 2016. 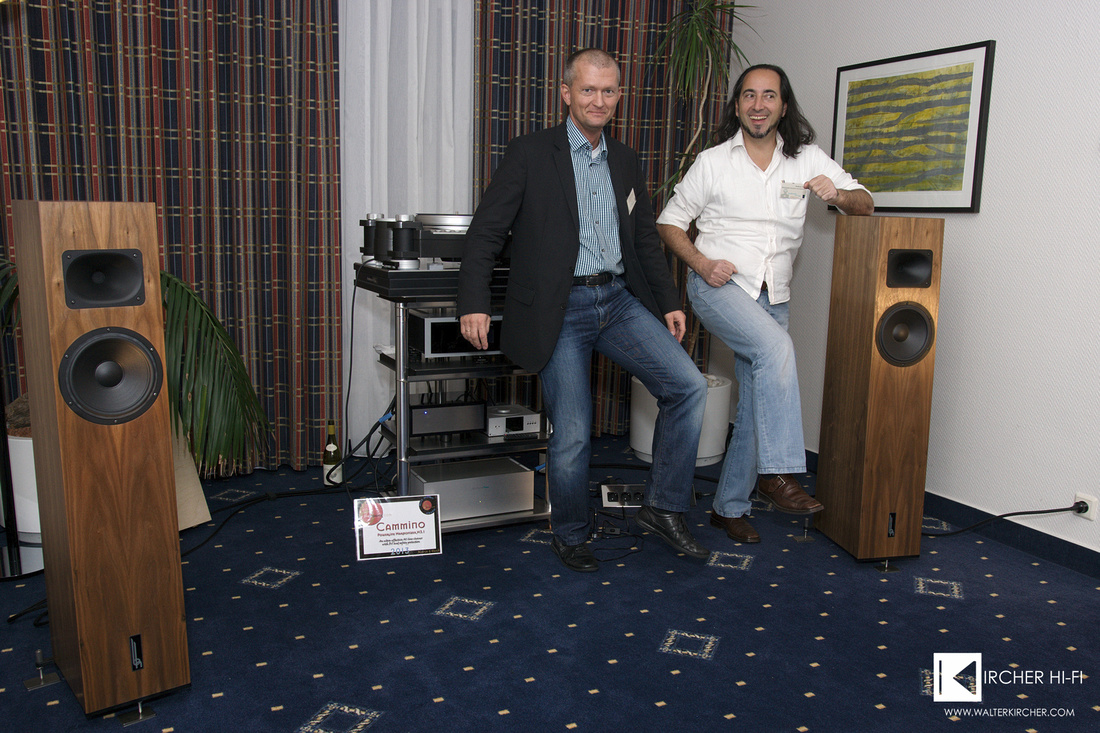 As there is no clear winner I start simply in chronological order with the first exhibition - the Norddeutsche HiFi-Tage in Hamburg (means North German hifi days), held in February. I took part there with Symposium Acoustics (racks, bases, bearing devices). I exhibited there together with the brands Blumenhofer Acoustics, Cammino, Einstein Audio and TechDas.

What is special about Hamburg? It is the best regional fair in Germany - more than 4000 visitors filling the Holiday Inn hotel. The atmosphere is very familiar, setups are not so high priced as Munich, friendly relaxed Germans mainly from Northern parts. One strong dealer (the hifi studio Bramfeld in Hamburg) made the exhibition within 10 years as the best in the whole of Germany. And complete German press and dealer competitors take part too - Congrats. 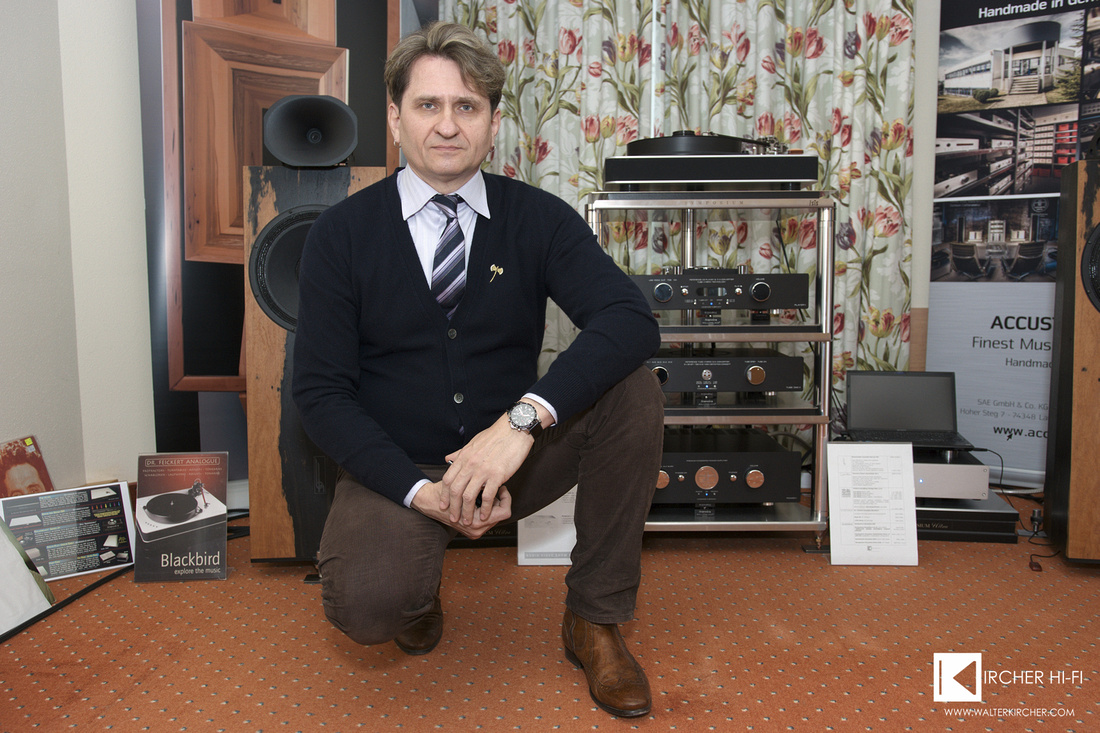 End of March 015 - first time in Prague at Czech Audio Video Show: Accustic Arts electronics, Blumenhofer Acoustics speakers, Chisto Das Klang cables, Feickert record player, Cammino power filter, and as always Symposium Acoustics rack, bases and bearing devices. To be at a fair in Prague is like holidays. Prague is like my Austrian Vienna a fantastic old city with deep cultural background. Czechs are very friendly - they greet entering our fair room and greet again leaving. Even my beloved opera records could play on audience request. We made a first good impression and want to come 2016 for continuity and still better contacts there again. Stay tuned. 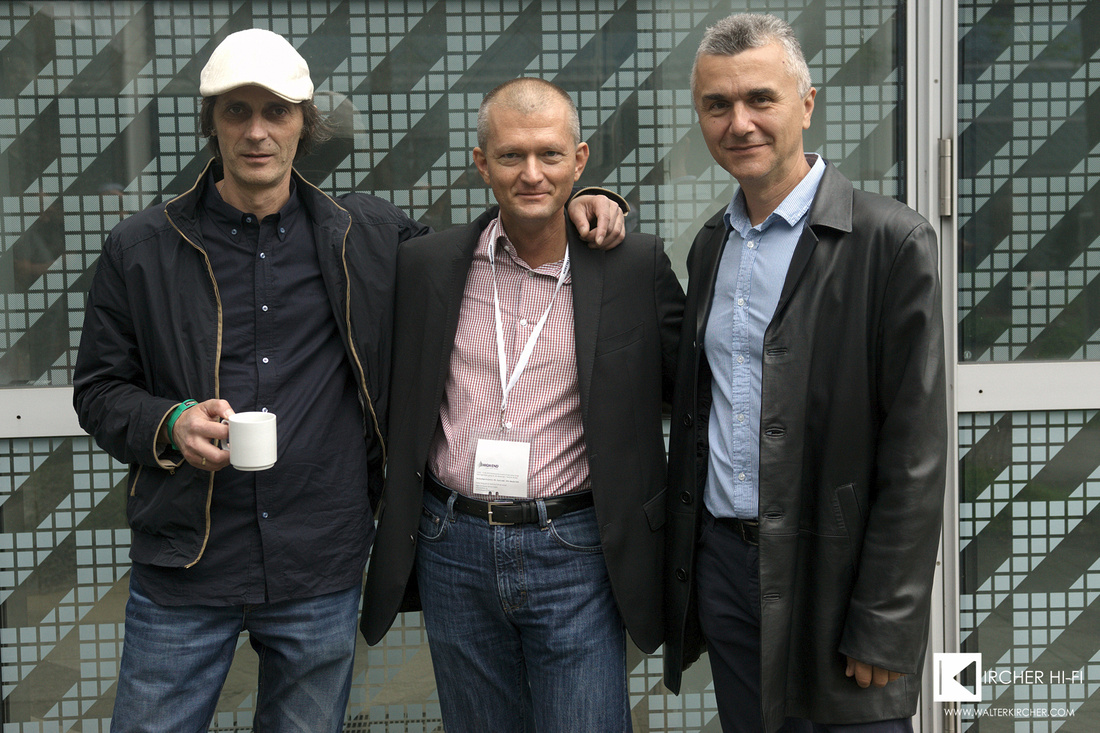 May - the High End 2015 in Munich - biggest global high-end audio fair now. This year had not to assist in a exhibitor room and that was excellent. Munich is not so about great sound and i know many friends always complaining about bad sound in many rooms. Seldom i could listen there to good classical music. Nevertheless, there was to hear very great sound experience in a few rooms too! So what is special about Munich? Easy to describe. As biggest global fair now you can meet many manufacturers, developers, press from all over the world. Main part of visitors of the fair are also in high-end audio business. So i had 3 long days there talking with many, many interesting people from countless brands and met most of my local dealers there too. My resume of Munich: perfect for contacts, networking, meet important people in real life, to stay in touch. Because of high prices for Fair participants you will not meet small German, Austrian distributors exhibiting in Munich - for this purpose many regional shows exists.

Look for all my photo albums and watch the high-end audio guys i met in Munich. 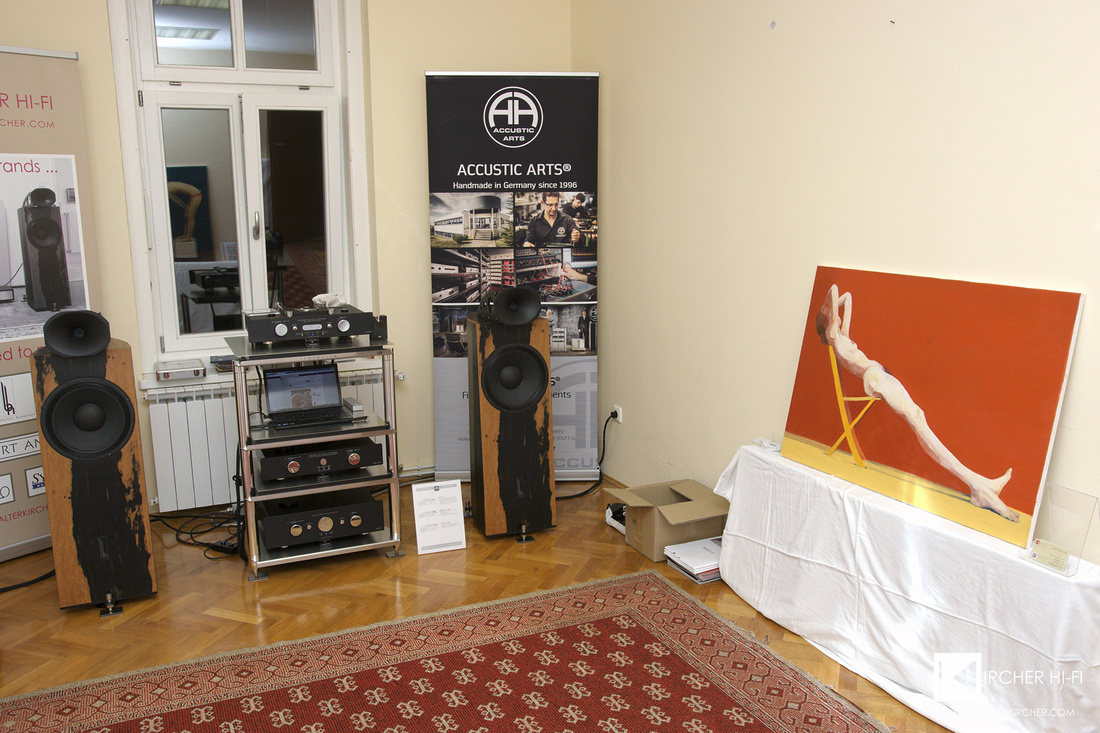 Next weekend of May I took part at the famous Multipak show in Pakrac, Croatia. Pakrac is a very small city in south of Zagreb - some would say in nowhere area. :) You still recognize there damaged buildings from former civil war. Robertoshop alias Bozidar Savi is propably the most powerful dealer in whole ex Yugoslavia region and founded this special show. You came mostly from loud Croatian capital Zagreb by car, enter this small city and relax. No noise, no traffic, only one hotel with Austrian bank inside - very comfortable. 3 days whole city only for high-end audio - Robertoshop and many other dealers, distributors exhibit at different places in town. So you could take your friends, family with you... walk in city... visit coffee house.... live music at several places... go for lunch in a restaurant or pizzeria. Almost all well-known brands with high reputation shown there, a magic place for hifi! In comparison to Munich my sound experience with similar equipment in most show rooms was much, mach better in Croatia. Slavic people are deep in music. Bozo told me regardless of price there MUST be emotion in a playback system. Right guy, same blood type!

After the best summer since many years audio season started again in late September - I participated at two Vienna Vinyl & Music Fairs - in Vienna and Graz. Brandnew fair concept in Austria - it is about combining live music, vinyl exchange and classic hifi. Of course analogue playback via outstanding Dr. Feickert Analogue record player and presentation of my Chisto cleaning fluids for analogue records were in focus. Nobody could overlook the classy Blumenhofer Acoustics loudspeakers. Accustic Arts and their sound engineer Milan Saje presented in Vienna their first analogue record - now available in stores. Great place for analogue addicts in Vienna! In Graz the fair was part of big public general fair - so thousands of visitors introduced to high-end audio in an easy way. During the fair in Graz we had the honor to listen to a live concert with Sir Oliver Mally. If you like Blues - you must buy his new record Shapeshifter!! A voice to cry for (take care of your girls), like a young, but fully alive Johnnie Cash - lively, powerful, varied songs. A big campaign to reach more normal people again - a good place where music lovers are looking for good records. We will take part 2016 again.

All photos including live concerts here 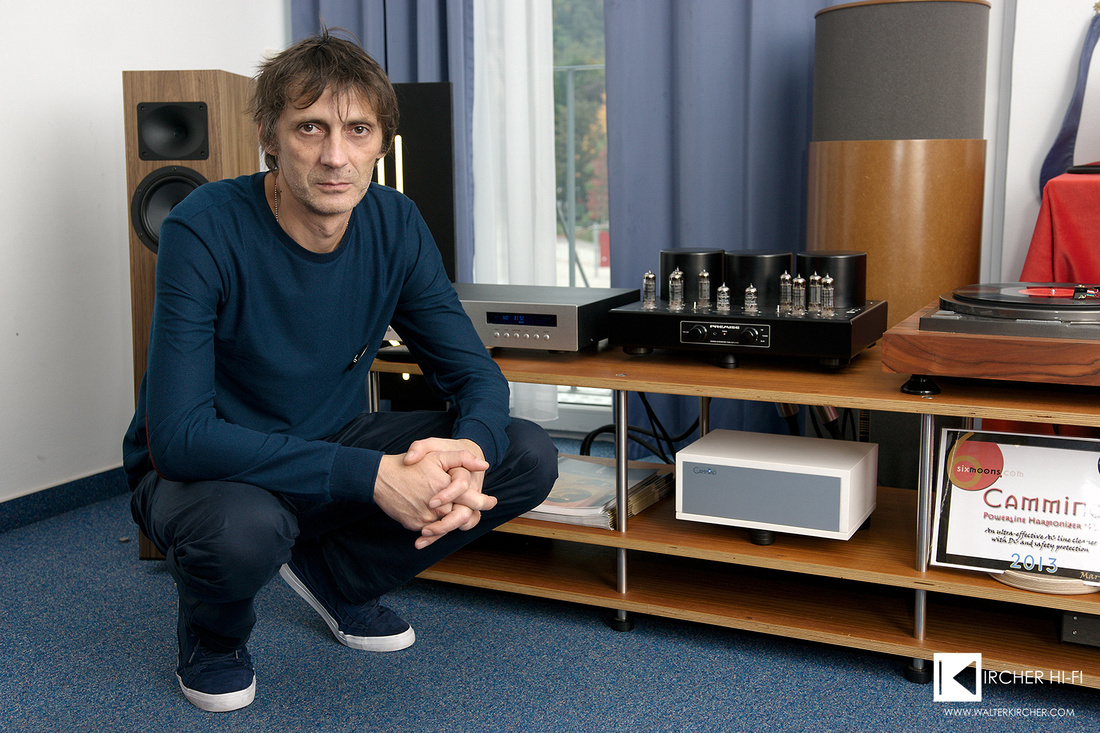 Next fair in October following was the HI-FI multimedia SHOW 2015 in Ljubljana, capital of Slovenia. Only two hours from my city in Austria i drove there to visit the fair for one day. Slovenia is a small country with a population of just 2 million - Already more than 20 years there a relatively large Hifi Fair takes place. Slavic people, deep in music and as ex Yugoslavia was not so closed as other countries of Eastern Europe Slovenians were in touch with hifi much longer - like Austrians probably. My brand Accustic Arts was shown, partnered with big Slovenian Gallus Audio speakers. Blumenhofer Acoustics Tempesta 17 speakers made big impression amplified by the sweet Trafomatic Audio Premise amp (2x4 EL84 tubes) - source an old, tuned direct drive Technics record player - all cables Cammino. Nice fair, near, worth a visit. 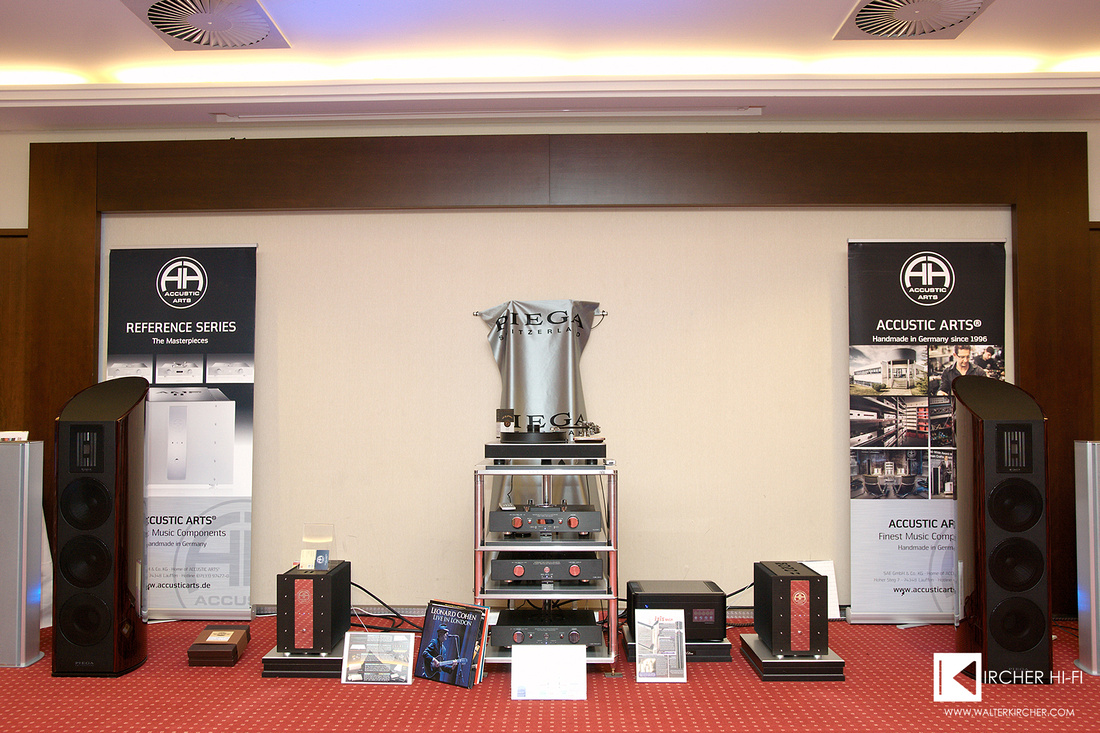 After 2013 again Bratislava, capital of Slovakia - took part at the Audiovideokino 2015 show - with full Accustic Arts reference electronics setup, complete Chisto Das Klang cables, Symposium Acoustics rack, bases, bearing devices, as analogue source Dr. Feickert Analogue Blackbird, Swiss Piega C60.2 speakers. After warming up great sound. Bratislava is less than one hour in East of Vienna - big great show Slovakians established there. Some big, powerful distributors make this great fair possible - direct in the heart of downtown Bratislava. All rooms are carefully decorated there, noting every detail, many rooms got acoustical treatments. Friday is special vip evening with countless guests, buffet in all rooms, drinks, many girls too and all seem interested in hifi stuff. Not to be overlooked are the many pretty girls, visitors and show hostesses. Girls there are also interested in hifi - you can watch them taking photos of the setups! From Vienna fairs I know many visitors too and have to add that i detected almost no Austrians visiting that great fair so near from Vienna - on the other side the Vienna fair is always visited by many Slovaks. Good mood and great entertainment ruled here. 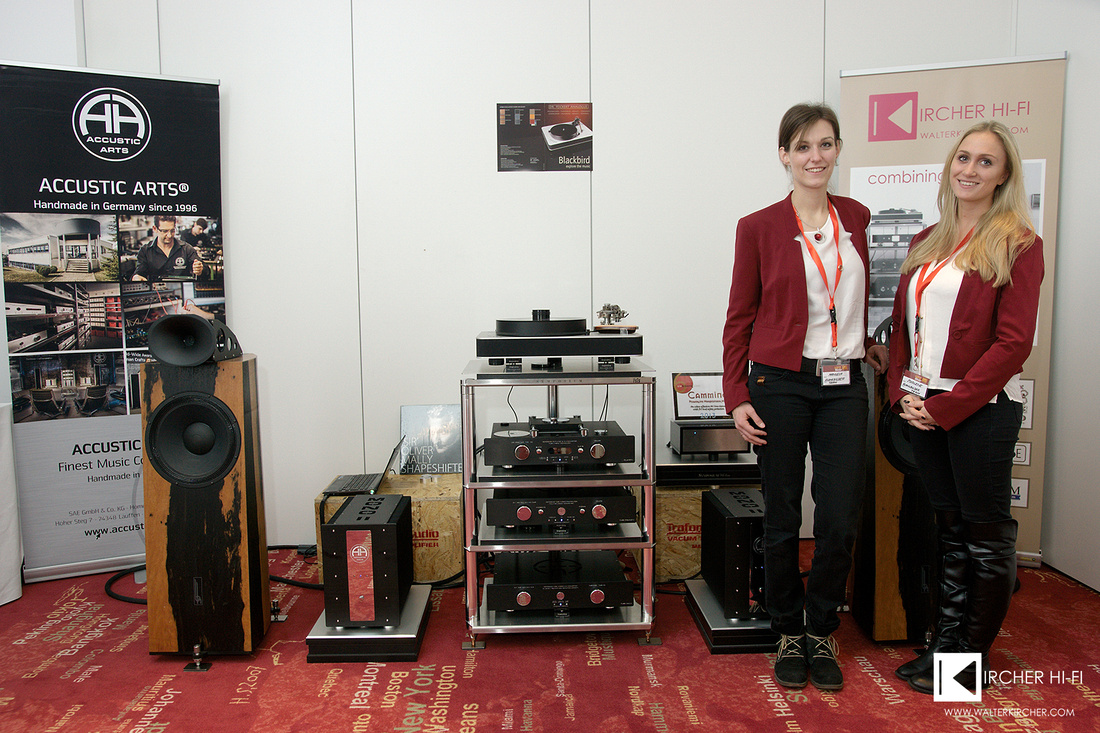 Vienna Klangbilder 2015 - last show this year in capital of my own country. So take care as i am biased... want always to show best sound here. :) Vienna is an international metropolis - so not comparable with all other places I visited 2015. Probably Vienna is the capital of music too - many say best opera house in the world - I agree. It is the fair there i can play more classical music and opera than at any other place - and visitors do not leave the room. Part of the fair are visits and life concerts of many famous classical musicians too - easy to find in Vienna - anyway also big names in Jazz and Blues music you will meet there. Finally i got there the new analogue record of Sir Oliver Mally "Shapeshifter" - big recommendation for all Blues fans reading my blog - a must have. Accustic Arts participated for the sixth time in Vienna - so now a high-end audio fixum in Austria, Blumenhofer Acoustics speakers had their premiere. Dr. Feickert Analogue Blackbird record player helped me to audition some new Decca classic records. And as always all gear were on Symposium Acoustics racks, bases and bearing devices to show their very best. Second premiere in Vienna - complete cables setup from Italy - from Cammino and of course the Camino Power Harmonizer again doing its sweet job. 2015 Vienna was very successful show - the big conference room near the lobby worked perfect. Lyra boss Stig Bjorge seemed to like my sound too - as i used a Lyra Kleos cartridge mounted on a Reed 3P 12" tonearm

​So who is the winner, my favorite? Hamburg for German market. Prague as a beautiful place to visit absolutely. Munich for contacts, networking, meeting high-end audio people from anywhere in the world in real life. Pakrac as big audio, music party with very special flair - difficult to copy. Vienna Vinyl & Music Fair because of analogue records and live music. Vienna Klangbilder for high-end audio and classical music with Vienna charm.